It has been very rewarding to discover that people can understand each other even when they don't speak the same language. Yu Watakabe and Sugako Honda told their interpreter that this is the memory they will bring back with them after their stay at the Camp Lyse organized by Lions Clubs International's Youth Exchange. They will be travelling home after spending four weeks in Sweden and with their addressbooks filled with email addresses.

"It's fortunate that email exists, we shall keep in touch with many of the people we met here in Sweden," says Yu.

Yu Watakabe who is från the city of Nagoya whereas Sugako Honda who is from Kagoshima , Japan are both 17 years old. They applied for the Lions youth Exchange programme in order to learn English. Neither of them knew about Lions prior to this. It was through their school and during their search for grants that they came across Lions. It was Lions Club Nagoya Kita that sponsored Yu's trip to the camp in Sweden and in Sugako's case it was Lions Club Kanoya.

"The reason why I chose Sweden was that I wanted to learn English and see the Swedish nature. I had heard that Sweden has very beautiful neature and culture," says Yu.

"I had heard that Sweden has a good welfare system, among other things that education is free in Sweden - incredible!" adds Sugako, " I wanted to see the welfare system." 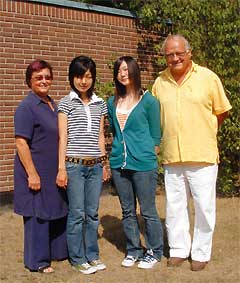 Both girls also managed to attain their goals as well. Yu did it by volunteering at a nearby university of agriculture. She got to lead a cow around the paddock and was guided round the university. Sugako got to visit an old folks' home.

None of the girls have ever been to Europe before and their first impression of Sweden was pleasant and cool - even if by Swedish standards it was considered a warm summer. The second impression was that the swedes ate very often and a lot. In Japan only three meals are eaten - breakfast, lunch and dinner. It is quite foreign to them that we in Sweden stuff ourselves with cakes, buns and snacks in-between meals. Another thing they noticed was that sushi was available in Sweden - something they did not expect.

" It tastes good even though it is different from the ones in Japan," says Yu.

What is the difference then ?

" They serve Jasmine tea to the meal here whereas in Japan we serve green tea."

Both girls have been in Sweden a total of four weeks, first one week at their respective host family in Orust and Uddevalla and then another two weeks at the Camp Lyse itself. There were 29 youths from 17 different countries and then another week together with a new host family.

"To us as host family it's been quite an exciting time to learn about their culture. In general I don't think there is that much difference between these two girls and the youths in Sweden. They are however by Swedish standards very shy and cautious," says Gudrun Rytterlund Nordström, the girls' host the last week.

Her husband adds , " It occurred to one that we human beings are really quite similar."

Yu and Sugako did not know each other prior to making this trip to Sweden.

" It is only one and a half hours' flight between our cities in Japan, And their is always email, which is fortunate," they say.